The prevalence of disease has greatly diminished since the 1900’s. Even though the presence of polio, measles, mumps, and pertussis are all pretty uncommon these days, the sheer mention of these illnesses frightens many. These fears are generally due to the lack of education regarding disease. Many fear falling victim to these illnesses will shorten their lives thereby leaving loved ones behind. Because of this, we rarely ask questions or object when physicians tell us we need to vaccinate. Educating ourselves on the facts surrounding disease and vaccination can help us determine whether or not the routine practice of vaccine administration is right for us and our families.

Let’s take a look at history and the standard of living back to the 1900’s. This was a time of pure filth. Garbage of every kind was thrown into the streets. This included human and animal waste (poop and pee), and dead animals. Indoor plumbing was not yet available for the flushing of toilets, washing of hands, or hot showers to rinse away germs and viruses. Drinking water sources were polluted with human and animal excrement and pathogens. Disease ran rampant and life expectancy averaged less than 49 years of age.

The Chicago Sanitary District was formed in 1889. By 1900, efforts were being made to clean up living conditions. Indoor plumbing became available to flush sewage away from the cities. By the 1930s, the availability of indoor plumbing re-classified homes without indoor plumbing as substandard. The Federal Water Pollution Control Act of 1948 provided assistance to state and local governments for the sanitation infrastructure. The Act was amended in 1965 which set water quality standards. Incidence of disease and mortality began to gradually drop with the newly access to clean water and waste removal.

The Environmental Protection Agency (EPA) was established in 1970 and the Clean Water Act was in effect by 1972. This required industrial plants to improve their waste procedures in order to limit the effects of contaminants of freshwater sources. Two years later, the Safe Drinking Water Act was established which regulated public water systems. With all the efforts to improve sanitation and clean water sources, disease began to naturally decline before vaccines were available. Evidence of this is contained within the charts below.

Measles is an illness spread from person to person primarily from coughing, sneezing, and poor hygiene. The main symptom of measles is an itchy skin rash. While it is known to kill undernourished children in poor countries, only a few people die from measles in the United States. (1).

The SUMMARY OF NOTIFIABLE INFECTIOUS DISEASE & CONDITIONS is a report provided by the Center for Disease Control (CDC). It contains official statistics for the reported occurrence of infectious disease and conditions. This report is required to be available within 6 months of the year ending for the previous year. This, however, is not being done. The last report was from 2015 for the 2014 year. As such, the statistics provided reflect the most current available information.

The Summary of Notifiable Infectious Disease & Conditions confirmed 288 cases of measles from January 1 to May 23, 2014. The report concluded that 30% of the cases were vaccinated.

There were NO DEATHS from the disease.

VAERS (Vaccine Adverse Events Reporting System) is a reporting system designed to monitor negative effects of vaccines. It is co-managed by the U.S. Centers for Disease Control and Prevention (CDC) and the Food and Drug Administration (FDA).

The VAERS Surveillance Report from 1990 to 2017 confirms 250 childhood DEATHS relating to the vaccine for measles, mumps and rubella (MMR).

The MMR vaccine may be associated with brain autoimmunity, autism and genetic mutations due to human fetal cells from aborted babies used in vaccines (WI-38 and MRC-5) . (18)

Mumps is an illness contracted through coughing, sneezing, saliva, and poor hygiene. Severe complications are rare. 30%-40% of mumps do not exhibit symptoms.(4). The most common symptoms include fever, headache, muscle aches, fatigue, loss of appetite, and swollen salivary glands. Prior to vaccination, nearly all mumps cases recovered uncomplicated and received permanent life-long immunity.(5).

The SUMMARY OF NOTIFIABLE INFECTIOUS DISEASE & CONDITIONS – CDC for 2014 reports a total of 1,223 cases of mumps.

There were NO DEATHS from the disease.

The MMR vaccine (measles, mumps, rubella) was introduced in 1963. Please note the extensive natural decline in mumps prior to the vaccination availability.

According to the Summary of Notifiable Infections Disease & Conditions, outbreaks are known to occur despite high 2-dose vaccine coverage. (6). They also reported a median vaccine-effectiveness for the mumps vaccine at 78% for 1-dose and 88% for 2-dose. (6). This means there is a vaccine failure rate of 22% for individuals receiving 1-dose and a 12% vaccine failure rate for those receiving 2-doses.

You decide: is there a benefit that outweighs the risks associated with this vaccine?
Vaccines do NOT guarantee immunity. Vaccines DO have significant health risks. 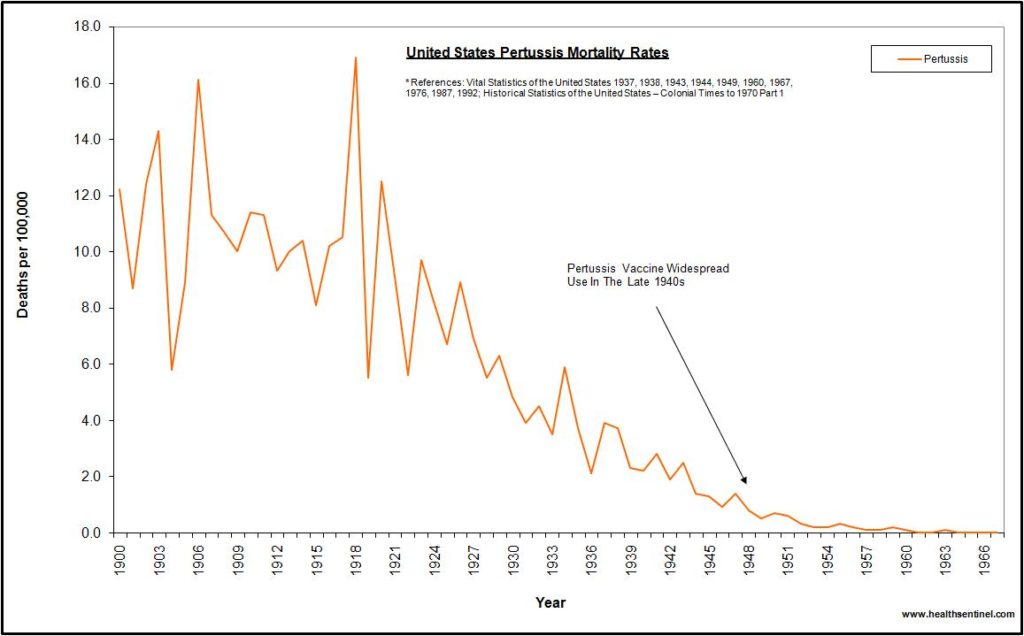 Pertussis is often referred to as whooping cough. It can be transmitted through coughing, sneezing, and poor hygiene. The primary symptom of this illness is coughing.

The PERTUSSIS SURVEILLANCE REPORT CDC – 2015 confirms 20,762 total reported cases of pertussis. 4,478 of the cases affected children between the ages of 6 months to 6 years in age.

Mortality rates for pertussis steady declined for 70 years prior to the vaccinations being licensed in the 1940’s. (7). Please refer to chart above. The article in The Lancet suggests the steady decline of disease before nationwide vaccination proves there is no evidence that vaccination played a major role in the decline of incidence and mortality. (19).

Many compensations awards have been given to pertussis vaccine deaths that were initially classified as Sudden Infant Death Syndrome (SIDS). (8). An estimate of at least 13% of all unexplained infant deaths occurring nationally can be attributed to the DPT vaccine. (9). One study concluded that 17 of 23 vaccinated SIDS infants (32%) died within 24 hours of the vaccine. (9).

Diphtheria is an extremely rare illness in the US that causes a thick covering in the back of the throat that can cause breathing problems. Between the years 2000-2007, there were only 5 total cases in the United States. (10).

The FDA (Food and Drug Administration) states that diphtheria may occur in vaccinated individuals. They state “the permanence of immunity induced by the toxoid is open to question. (11).

The DTaP Vaccine Insert lists the following reported adverse reactions to the vaccine: Coma, Seizures, Brain Disorders, Apnea, Epilepsy, Guillain -Barré syndrome, Anaphylaxis, Cyanosis, Sudden Infant DEATH Syndrome (SIDS).The vaccine insert states that it is unknown whether the vaccine can cause fetal harm when administered to pregnant women and it is not known whether the vaccine is excreted in human breast milk. (20). Please thoroughly read vaccine insert for complete lists of adverse reactions.

Influenza, also know as the Flu, is an illness that is spread by coughing, sneezing, and poor hygiene. It can cause fever, cough, sore throat, headache, muscle aches and fatigue that lasts a few days. The greatest risks of complications arise in the elderly, and people with preexisting medical conditions such as diabetes, anemia or compromised immune systems (AIDS). (14).

22% of the children aged ≥6 months had been vaccinated against influenza as recommended by the Advisory Committee on Immunization Practices.

Pregnant women vaccinated against seasonal influenza and A-H1N1 (swine flu) had high rates of spontaneous abortions. (15). Both the seasonal and swine flue vaccines contained 25 mcg of mercury per dose. This exponentially exceeds the Environmental Protection Agency’s (EPA) safety levels for a developing fetus during the 1st trimester. (15).

Children who receive an inactivated influenza vaccine are significantly more likely than non-vaccinated children to be hospitalized. (17).

Varicella, also known as chicken pox, causes fever and an itchy rash of blister-like lesions on the skin. It is spread by coughing, sneezing, and direct contact with skin lesions.

A total of 10,089 (99%) of 10,172 cases reported to CDC from 40 states had data on at least one of the key variables important for monitoring the varicella vaccination program:

Of the cases with data reported for each of the key variables:

Of the cases with data reported for each of the key variables:

33% of the people who were vaccinated STILL contracted the infection.

VAERS: 1990 to 2017 confirms137 Childhood Deaths related to the Varicella Vaccine.

VACCINES DO NOT GUARANTEE IMMUNITY.

VACCINES DO HAVE SIGNIFICANT HEALTH RISKS.